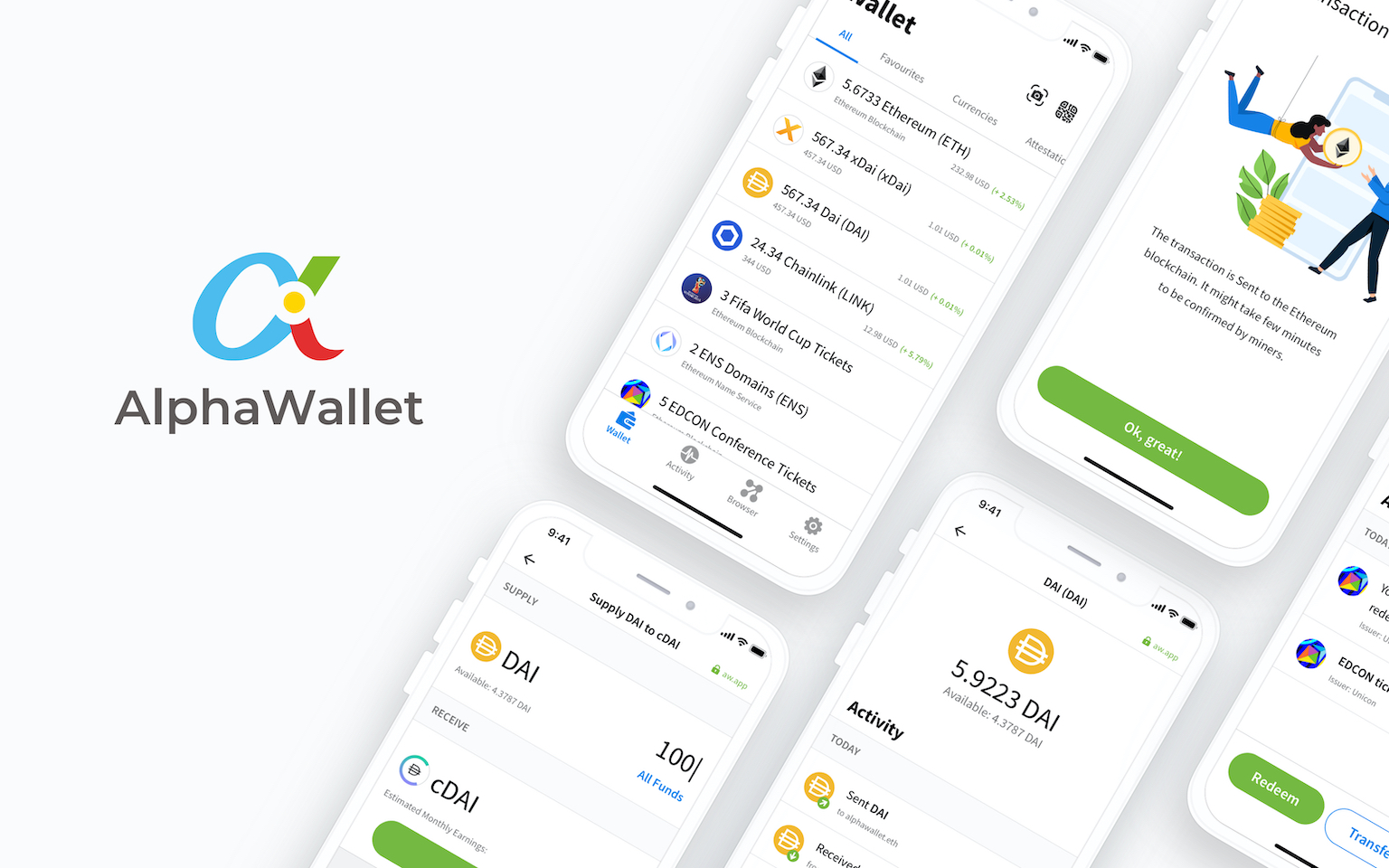 Ross Peili: What did you have in mind when starting AlphaWallet, more specifically what it was missing from old Ethereum wallets, the thing you instantly understood you could provide with a next-generation wallet?

Similar to other decentralized wallets, AlphaWallet lets you backup your own pair of keys as well as the seed phrase required in order to restore your wallet in an analogous scenario — something completely absent from custodian wallet providers such as Coinbase, and major cryptocurrency exchanges such as Binance.

Victor Zhang: We are in the excellent position to fully comprehend blockchain’s capabilities, as well as its flaws. Any blockchain-powered application requires a full application logic (business logic) which includes the logic in smart contract (ownership and transactions rules), and the logic outside the blockchain.

The UI is on top of both logics. A blockchain user-agent (wallet) interacts both with the UI and the full application logic in this case, so that the experience of the end consumer feels seamless and easy to grasp for businesses and consumers outside the DLT realm.

When we started AlphaWallet, there were practically no other companies that acted as a super user-agent able to support and interact directly with blockchain-based smart-contracts as well as traditional business logic and incentives.

Old Ethereum wallets acted as nothing more than key management portfolios and signing tools. In order to achieve this state of being a super user-agent (context-based app container), we developed the popular TokenScript framework for token issuers and blockchain devs.

Essentially, TokenScript is similar to web frameworks used by web apps, combining the attributes of a blockchain-based token and the perks of a web app, enabling easy to use intuitive UIs such as the AlphaWallet, from where users can interact directly with blockchain-powered applications and services.

Through TokenScript files, AlphaWallet understands the full logic (smart contract logic and the logic outside the blockchain smart-contract) and treats each token respectively. For example if you own an NFT that represents a digital event ticket, not only AlphaWallet will know it’s a ticket, but it will be also in place to verify and showcase this ticket to the ticket scanner, due to the interoperability build on top of traditional business incentives.

Ross Peili: Besides giving your customers the ability to handle their keys and truly own their crypto, what would be some of the key features AlphaWallet offers to its handlers?

I’ve seen there is a dapp list, with popular decentralized applications users could engage with instantly, even if they are complete beginners and unfamiliar with the scene. Among these applications, users could utilize something like Uniswap, a decentralized wallet-to-wallet exchange that enables the exchange of ERC-20 tokens directly on-chain.

Victor Zhang: AlphaWallet is tailored to address a variety of users depending on their needs. For the general super user-agent scenario, AlphaWallet offers TokenScript compatibility, it supports all EVM (Ethereum Virtual Machine) networks, whether public or private, and it offers a top-shelf web3 browser.

AlphaWallet is the first Ethereum wallet utilizing a Secure Enclave, a user-friendly key backup and recovery process (shamir secret sharing). There will be attestation support, a hardware wallet account will be available for our demanding users, smart-contract accounts to batch transactions for different purposes, an MPC-based vault, and of course, secure p2p communication.

For specific use cases, it depends on the token features. With your Car ownership token, you can control your car, sell/transfer/collateralise/share and access all other services based on your ownership. With cDAI (Compound DAI), you can earn interest on your DAI. With Decentralized exchange pools tokens such as the one hosted by Uniswap, you can earn interest in the form of transaction fees. With CDP/Vault token, You can borrow DAI collateralizing your ETH with MakerDAO. You can own and utilize any form of tokens out there.

There is an in-build web3 browser, you can use it to experience the new web and different dapps.

Ross Peili: That is indeed a use-case I am looking forward to utilizing at the first given chance. Is there a specific list of cryptos under the form of ERC-20 tokens supported by AlphaWallet, or even private, and/or personal smart-contracts could be imported and recognized by the wallet interface?* An important addition web3 wallets bring to the table, is the fact that each wallet could be used as web3 ID, meaning that your wallet can also be attributed as your entry point into a dapp, a crypto realm, or an exchange

Victor Zhang: AlphaWallet supports any token subjected by a smart-contract. If you don’t need interoperability, you don’t even need to follow any ERC. Whether smart-contract related or not, actions that took place in the AlphaWallet interface are rendered from TokenScript files, and are not hardcoded. Not just “you” but also what you own, as well as what you’re eligible for, can be instantly verified without bothering the original issuers of a respective token. On its own turn, this provides a never-achieved-before level of convenience for netizens, it enables an open and free market for service providers and add extra utilities to the tokens for token issuers, whether the token represents you own some money, you own some collectibles or you own some physical objects. Token can represent you own any type of right.

Semi-fungible tokens represent semi-fungible rights like the ownership of a book — your book is identical to mine, yet we have separate pieces of the same book. Any type of token can be used for authentication and authorization with any applications(blockchain or not).

As for what you call “identification” I’d rather use the term Token Negotiation, as expressed here, which is much powerful than just using wallet address as an ID.

NFTs In a nutshell

Ross Peili: That’s a pretty interesting term. So, web3 wallets also support direct access to your NFTs (non-fungible tokens or ERC-721 tokens) stored in the respective wallet. Could you explain how easy it is for someone with no excessive blockchain knowledge to send and receive cryptos and digital collectibles with AlphaWallet?

Victor Zhang: This is pretty much based on your own NFTs. The wallet provides you with a variety of services that could be applied to your token, but it is up to the token issuers which of these services will be utilized and in what context.

Take for example our experiment with FIFA back in 2018. The 28 consumers who purchased their NFT tickets had 0 knowledge of blockchain, yet they used a fork of AlphaWallet as a ticket-management application.

We helped FIFA to set up their own gas station that would cover all the gas fees for the free P2P NFT transfer. Then, the NFT contract has build-in DvP protocol to provide features like selling your ticket through a MagicLink (pre-signed transaction message with conditions). With AlphaWallet, users don’t even need an internet connection in order to generate a dynamic QR code that would allow them to pass the gate.

Same for other tokens, if the token issuer is willing to cover the tx fees for his token transactions, in order to avoid crypto-confusion among his customers, he could easily do that by writing a TokenScript file associated with his respective token, all AlphaWallet users could then exchange this token free of fees.

Everything is at a very early stage. Cryptocurrencies are just one type of tokenized rights. There are all kinds of different rights that could be tokenized and increase the value of the industry hundred-fold times.

Beside gas fee transfer, AlphaWallet users will be able to send any token to any email, mobile phone, twitter handle, Facebook handle etc.

This feature is achieved through Attestation support in TokenScript and AlphaWallet, which will be available worldwide soon. For now, by utilizing the TokenScript framework one could develop an application on top of blockchain not just as a feature, and with AlphaWallet your customers could use the application you developed as a regular app.

Ross Peili: What is the ideal future of crypto-wallets? Do you see them replacing common micropayments apps such as WeChat, and AliPay? Could they be adopted for far more than just monetary value exchange mediums? What are some key use-cases that come in mind, besides identification, and digital assets management?

Victor Zhang: I see the future of wallets being context-based app containers, similar to traditional apps such as WeChat or AliPay, where tokens would be used as integration points and context, applications/services can be integrated on user side through tokens, and users have full control over their own digital rights. Over crypto wallets enable the next level of economic convenience:

Ross Peili: I see Mr. Zhang. Would you suggest that crypto adoption is also increasing wallet adoption, or is it vise versa and most people don’t realize it? I mean, wouldn’t we also have increased crypto adoption if crypto wallets were among the easiest and most intuitive apps to use?

The important thing for wallet providers to consider is not just to create an easy-to-use interface, but it needs to enable multiple use-cases and support different token and business logic.

Ross Peili: Finally, if you had to pick just one, what would be the most important aspect web3 wallets enabled? (crypto-games, NFTs, DeFi etc.)

Victor Zhang: For starters, crypto-games, NFTs, and DeFi are not necessarily scattered concepts, considering NFTs could be used both in crypto-games and the DeFi ecosystem.

Before co-founding and leading AlphaWallet as a CEO, Zhang and his colleagues were involved with various other DLT projects carrying an excessive international business experience that covers every large economy between Asia and Australia.

Being one of the earliest players in the scene, they were involved with Bitcoin since 2011, where they participated directly in 3 forks, conducted and managed 7 ICOs (initial coin offerings) and served as the tech architect for several fintech firms that sought blockchain solutions at that time.

During their time with the largest Aussie bank CBA, the team managed to lead over 20 blockchain applications funded and overseen by the financial institution. It is important to watch traditional business pioneers not just embracing, but also shaping the blockchain revolution with the experienced additions. We are looking forward to seeing how AlphaWallet might evolve and attribute to the mass adoption of popular public blockchain platforms such as the Ethereum.